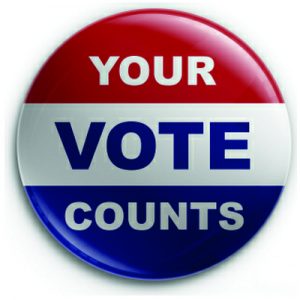 In a recent sermon about repentance, I mentioned in passing that many in our country are lamenting the current presidential campaign as a “lesser of two evils” situation. I subsequently suggested that the behaviors we choose, including the choice to repent of things that are wrong, are often a kind of “vote” for good or evil. And, I said, a vote for “the lesser of two evils” is still a vote for evil.

So, I would urge you to vote next month. Vote with Christ’s character and purposes in mind. Vote, as best you can, in a way that is most consistent—or less inconsistent—with your understanding of the values held high in the Kingdom of God.

Julie Minedew passed on to me the following prayer guide for our upcoming national election which I now commend to you.

It is critical that Christians pray for the coming presidential election. There is amazing power in united prayer. Pray with others whenever possible. The power of prayer can overcome any obstacle or ungodly influence and, indeed, do great things!

II Chronicles 7:14 – If my people, which are called by my name, shall humble themselves, and pray, and seek my face, and turn from their wicked ways; then will I hear from heaven, and will forgive their sin and will heal their land.

Acts 17:30 – Pray for repentance for yourself and for our nation.

Psalm 32:6-7 – Pray that Christians will be motivated to pray faithfully for this election and that the Lord would deliver us from the wrong leaders.

Proverbs 16:13 – Pray that our nation will listen to the truth and not be led astray.

Psalm 125 – Pray that those who trust in the Lord will not be shaken.

Psalm 86:14-17 – Pray that the Lord would defeat those who have no regard for Him in this election.

II Kings 13:16 – Pray that the Lord would put His hands on the person of His choice for president (and his/her team) and guide them in this election.

Daniel 2:20-22 – The Bible tells us that God sets up kings and God deposes kings. Pray with gratitude and confidence that God is ultimately in control.

Luke 12:54-57 – Pray that God’s people in leadership and our nation will be discerning and do what is right.

Psalm 16:7-8 – Pray that the Lord would give wise counsel and guidance to His choice for president in this campaign.

Proverbs 1:5-6 – Pray that God’s person will listen with discernment, add to his/her knowledge, and receive wise counsel in this campaign.

John 16:33 – Pray that the person of God’s choice would be given wisdom and ability from the Lord to overcome any obstacle or difficulty.

Philippians 4:13 – Pray that the Lord’s choice for president will have special strength and unusual ability from God.

Psalm 18:32-36 – Pray that the Lord would arm the person of His choice with strength; would guide him/her in battle; and would sustain him/her and give him/her victory.

Hebrews 11:32-34 – Pray that God’s person could, through faith, persevere and maintain his/her courage throughout this election.

2 Corinthians 12:9 – Pray that the Lord would empower and enable His person in any areas of weakness.

Habakkuk 1:5 & 3:2 – Pray that the Lord would do something that would utterly amaze us and give His servant victory.

Finally, let me offer you some provocative words from one of my favorite Christian writers and thinkers today, Ravi Zacharias, in a recent e-mail letter…

This election, as I see it, is the most defining one for the future of our world. I have no doubt I will receive a lot of negative responses to my even saying these things. I’m in the seventh decade of my life; criticism and personal attacks is the least of my concerns. The love for my family, my offspring and theirs, and the land that I love, eclipses egotistical seductions.

So I must speak my heart. It will all come down to the place and meaning of law, life at its essence, and moral worth. We must vote. Vote if not for the now, at least for the future. I hear many saying, “How strange that we are in a situation where neither candidate represents my values.” I agree. So with what philosophers would call “Hobson’s Choice,” I ask three questions.

First, which of the two candidates is more likely to surround the highest office with those with a hint at moral reasoning? That may at least give a glimmer of hope.

Second, who is more likely to appoint as keepers of the law those who go back to our roots in order to secure the future? That will at least recognize a beginning.

Third, who stands on a platform of values that guards my essence and my existence? That may at least guide our destiny.

One may triumphantly say, “But that is not foolproof.” True! But what is? The only one who is foolproof is God. And even of Him, the Scriptures tell us that the fool will deny his existence.

While the primary personalities may seem divisive, the voices in the wings and their moral roots may keep the branches—and our story—alive to give shade to a parched world. In her book The Roads to Modernity, Gertrude Himmelfarb makes an incredibly powerful statement. She says that the difference between the European Enlightenment and the English and American Enlightenments was really one word. For the French philosophes, reasoning was supreme. For the English and the Americans, moral reasoning was supreme. A world of difference, and diverse paths to the present…